You are here: Home / Archives for commodities

Crude Oil has been in a death spiral for months.  What is causing this market break in Crude? Will it continue?

These are good questions. And the answer on the seemingly bottomless crude oil market is that it depends on who you ask (and how you ask it).

Zero Hedge has had a number of great articles on crude, most recently suggesting that plummeting crude prices have been the result of a deal between the US and Saudi Arabia:

Two weeks ago, we revealed one part of the “Secret Deal” between the US and Saudi Arabia: namely what the US ‘brought to the table’ as part of its grand alliance strategy in the middle east, which proudly revealed Saudi Arabia to be “aligned” with the US against ISIS, when in reality John Kerry was merely doing Saudi Arabia’s will when the WSJ reported that “the process gave the Saudis leverage to extract a fresh U.S. commitment to beef up training for rebels fighting Mr. Assad, whose demise the Saudis still see as a top priority.”

– Why Oil is Plunging: The Other Part Of The “Secret Deal” Between The US And Saudi Arabia

It was heinous. It was underhanded.  It was beyond the bounds of international morality. It was an attack on the American way of life.  It was what you might expect from unscrupulous Arabs.  It was “the oil weapon” — and back in 1973, it was directed at the United States. Skip ahead four decades and it’s smart, it’s effective, and it’s the American way.  The Obama administration has appropriated it as a major tool of foreign policy, a new way to go to war with nations it considers hostile without relying on planes, missiles, and troops.  It is, of course, that very same oil weapon.

– The Oil Weapon: A New Way To Wage War

For those to whom the recent US campaign against Syria seems a deja vu of last summer’s “near-war” attempt to ouster its president Bashar al-Assad, which was stopped in the last minute due to some very forceful Russian intervention and the near breakout of war in the Mediterranean between US and Russian navies, it is because they are. And as a reminder, just like last year, the biggest wildcard in this, and that, direct intervention into sovereign Syrian territory, or as some would call it invasion or even war, was not the US but Saudi Arabia – recall from August of 2013 – “Meet Saudi Arabia’s Bandar bin Sultan: The Puppetmaster Behind The Syrian War.” Bin Sultan was officially let go shortly after the 2013 campaign to replace Syria’s leadership with a more “amenable” regime failed if not unofficially (see below), but Saudi ambitions over Syria remained.

Meanwhile, over at MoneyMorning, the speculation is that the Saudis, instead of acting in concert with the U.S., are actually trying to drive the U.S. out of the crude oil business:

There appears to be a direct battle underway among OPEC members for market share in a pricing environment increasingly defined by unconventional (shale and tight) reserves.

The move suggests that the biggest member of OPEC is prepared to let prices fall rather than cede market share by paring output to clear a supply surplus, according to a comment from Commerzbank, the Frankfurt-based global banking giant….

Today, the kingdom would need to reduce output by about 500,000 barrels a day to eliminate the supply glut caused by the highest U.S. output in three decades, according to several analysts…

Indications are that the Saudis intend to keep output steady until the end of the year, near the 9.6 million barrels a day extracted in August and September. However, that did follow the largest Saudi cut in almost two years made in August, according to the Saudi data provided to the OPEC Secretariat in Vienna at the time.

That’s because a further decline in crude oil prices would make some production in the United States unprofitable, preserving Saudi exports at the expense of American shale operations.

– Why The Saudis Are Cutting Oil Prices

So who is to be believed? Is it a conspiracy between the US and the Saudis to put pressure on Iran and Russia? Or does Saudi Arabia want to force US players out of the market?

Either way, the chart paints a dismal picture. 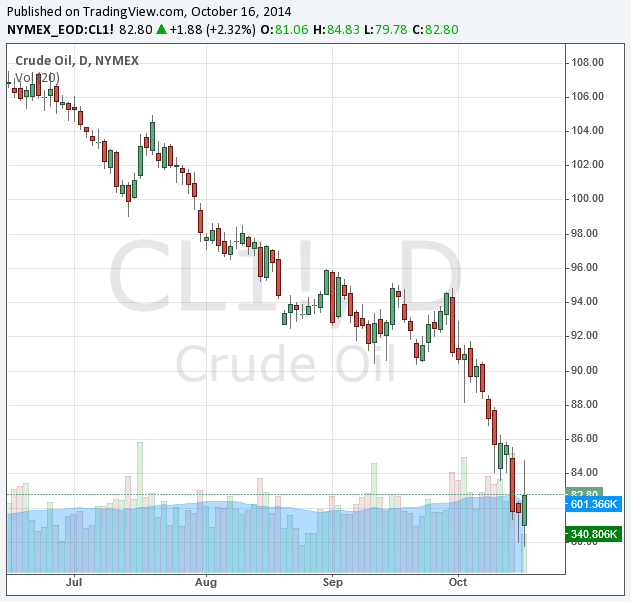