[ Keep in mind that the specific trades referenced in this article were wprovided as educational examples from an article originally published April 14, 2006. They are not intended to be investment advice of any kind. For that you need to consult with a market professional who is familiar with, among other things, your investment objectives, your risk tolerance, and your available risk capital. Read part 1 here. ]

In this section we will discuss a couple of additional strategies, and also give a couple of examples in other markets. The two strategies that we have already discussed were the bull call spread and the bull put spread.

I hope you have a handle on the bull call spread (which together with a bear put spread, may be referred to as debit spreads) because we are going to take that concept one step further in the next example: a ratio call spread. Its construction is similar to the bull (or debit) call spread, but we sell more than one call. Typically, the perfect world example would be selling two out of the money calls and buying one closer to the money call. However, in our gold market example, to give us a reasonable (in my opinion) risk/reward ratio, we will sell three out of the money calls.

Now in the ratio spread, we give up the limited risk we had in the debit spread. In exchange for taking more risk, the upside potential is higher. I like to think of it this way: by selling more calls that we believe will expire worthless, we are bringing in cash to help us buy a call that we believe will not expire worthless. That sounds like a fair deal, doesn’t it?

Remember back to our debit spread example. The average monthly range of gold prior to the June option expiration is about $41, so we want to consider selling strikes above 640. At this writing, the 615 call is only $15 out of the money. Gold could certainly make a move above this in the month we have left prior to expiration. The $60 move to 660 however, is less likely. 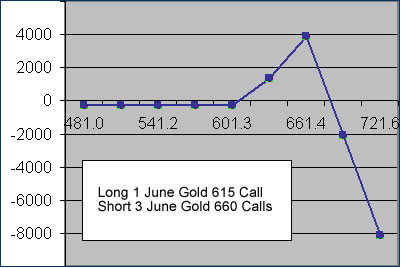 Here is a key point on the risk of a ratio spread that many new traders miss: gold at 660 is not where we start losing money on this position. Remember, at that point our 615 call will be $45 in the money (or $4500 per contract). That gives us room to offset what we would be losing in the 660s. So we don’t really start going negative until about 675 at expiration. Could gold make a $75 move this month? Yes, that is always a possibility. But the average monthly range says it is unlikely. That’s almost double the average monthly range.

Now traders that take a position like this will need to have some money in the account to margin the short calls. Additionally, it is highly recommended to allow extra cash to hedge with the futures as well. If we got the extreme extension this month that would take us shooting through 675 and then some, we would want to hedge our short calls with the futures. By buying a futures position against each short call, we essentially cover the call. Note, however, that we only do this against an extreme move against us in the market.

What if we were extremely bullish on the gold at this point? Bullish enough to sell an at the money put, what could we do to accomplish that position? We could also use a ratio spread in that case as well. This time, we will be constructing a ratio bull put spread (or ratio credit spread). This is done by selling a closer to the money option (in this case a put) and using some of the proceeds to buy more than one farther out of the money option of the same type. Our example will be as follows: we will sell one at-the-money put (600 strike) for 15.20 (or $1520 per contract). Using some of that capital, we will buy two 560 puts for $300 each. That leaves us with a net credit of $920. 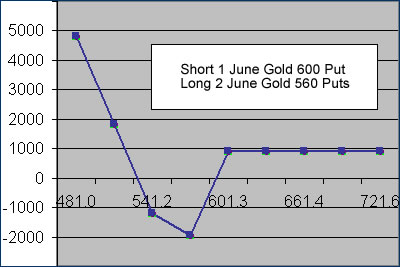 Now unlike the straight credit spread (which would be a bull put spread or bear call spread), that $920 is not the cap on what we can make in this position. If gold were to completely fall apart and break hard to below 520 we would begin to exceed that, due to the extra long put. However, similar to the credit spread, we have capped our risk on the trade. At expiration, our maximum loss would be incurred right at 560 where our 560 puts would expire worthless and the 600 put would be $40 (or $4000 per contract) in the money. Take away the $920 we brought in for the position and our maximum loss is $3080.

You can probably see that this can be a powerful strategy in the right market conditions, and gold may fulfill that requirement, but it does come with larger risk. And like the debit ratio spread, we could hedge downside risk using the futures. I am more inclined to only use this trade as an example.

Let’s move on and take a look at the silver market. Silver has been on a tear lately and has become, in my opinion, a difficult trade in the futures. Additionally, due to market volatility, option premium has made the options expensive. For example, as of this writing, the July Silver is at 12.70. The July 13.50 call is trading for 64c. Since one cent in silver is equal to $50 per contract, that makes this call, which is 80c out of the money (historically a big move for silver) worth $3200. So, like gold, this may also be a market that has good opportunity in option spreads.

The first position I would like to explore in the silver is the 13.00/13.50 bull call spread. As of this writing, we are looking at a net 11 cent cost for this spread (or $550 per contract), and that is our maximum risk on the trade. That, to me, is a fair price considering the maximum potential gain is a 50c move in silver less the 11c we paid for the position. That’s a maximum gain of $1950 per position, or a 1:4 risk:reward ratio. That’s a good trade. And with the current run in silver, that could be achieved in the 75 days we have until these options expire.

Now let’s take a look at a position that would take advantage of a retracement in the silver. If the current move were to falter, that could set up a retracement move. A 50% retracement of the move that began in September would take us back to about 10.00. A put spread that could take advantage of that kind of a move with a decent risk:reward ratio might be the July 1150/1100 bear put spread. As of this writing, this spread is about 14c (or about $700). The maximum gain on the position would be the difference between the strikes (50c or $2500) less what we paid for the position (in this case $700), which would equate to a maximum gain of $1800. This would be achieved at expiration if Silver were trading at or below 11.00. 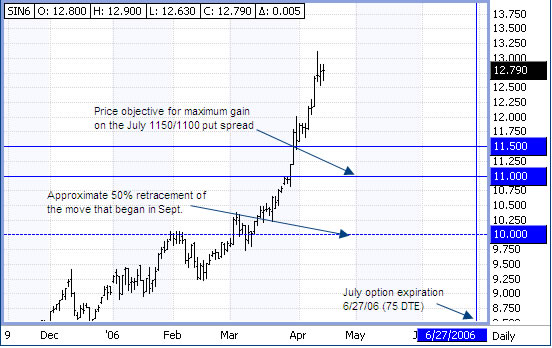 Another way to approach a market is to consider a strangle. This type of position is based on the fact that the market is going to do one of three things over time:

A long strangle position takes advantage of two of the three, covering the downside and the upside. (There is also a short strangle, which covers the sideways. Current market conditions in silver would not make this a wise position, in my opinion.) But an outright long strangle in the silver, close enough to the current market as to be reasonably achievable, would be an expensive position. But there is an alternative.

We can use the combined spreads that we discussed, the bull call spread and the bear put spread, and achieve a similar position. The only thing we give up in this scenario is the unlimited upside position of a straight strangle. The net cost would be the cost of the combined positions, or $1250. The maximum gain would be the same. This is a 1:1 risk:reward, which isn’t exactly what attracts people to the market. But for someone trying to take advantage of an extreme move in either direction, this may be a good, limited risk trade to use.

Well, if you have read both Part 1 and Part 2 of this article, we have covered a lot of ground. Please remember that all of these positions are intended to be used as examples. Consult a professional prior to placing any trades. And if you do not understand the risks, do not take the trade.

The risk of loss in trading commodity futures and options can be substantial. Before trading, you should carefully consider your financial position to determine if futures trading is appropriate. When trading futures and/or options, it is possible to lose more than the full value of your account. All funds committed should be risk capital. Past performance is not necessarily indicative of future results.The content of this article is Copyright © 2007 by Chad Butler. No part of this article may be reproduced in whole or in part without express written permission of the author.

A shipment of 600,000 doses of the AstraZeneca–Oxford vaccine arrived in Accra … END_OF_DOCUMENT_TOKEN_TO_BE_REPLACED